The Covers vs. Originals CHALLENGE! - A Hazy Shade of AWESOME

The Covers vs. Originals CHALLENGE! – A Hazy Shade of AWESOME

Ever hear an awesome song and find out later that it’s a remake? Or a song you know is a cover and it’s so amazingly good that you like it even more than the original? Both are incredible discoveries, not just because you love the songs, but because they also breathe new life into old tunes AND create a direct connection between eras that might have little else in common.

If you’ve been following along all these years, you know that I am very picky about cover tunes. On the one hand, redoing a song because it’s good and you like it is not enough if you don’t bring anything new to it. On the other hand, ripping a song up until it’s barely related to the original might be fun, but it only works if there’s still some tangible spiritual connection between the two. Otherwise why not just write your own song.

I’m not talking about repurposing: using words, chords, production elements and/or full samples of songs in service of a whole new song. That’s not a cover, and there are different criteria for when that works (see tons of awesome hip hop tunes). I’m saying that a flat out redoing of a song has to be both good on its own and still do justice to the source material. So it’s doubly rewarding when a song that fits that bill is also even better than the original. And one such song is “Hazy Shade of Winter”, originally by Simon & Garfunkel, and here by the Bangles.

First off, the Bangles are an awesome band, one of the pioneering all female groups of the 1970s/80s that showed that “girl groups” didn’t all have to be just vocal pop. They rocked hard, and they brought the pop goodness too. Their version of “Hazy Shade” brings out an energy and aggressive dark side that the original only hinted at, while still sticking very close to it in both spirit and structure.

Still, “Hazy Shade” is a bit of a fence-sitter re which is better. It’s a matter of taste and how your era influences what moves you most. Though I don’t think that’s always the case. For example, Whitney Houston’s “I Will Always Love You” blows the original away. Even the great Dolly Parton herself says that.

When I pick a cover to do, it’s because I hear something in it that I want to bring out and emphasize, to couple it with some new elements and shed new light on it. And it’s usually either a lesser known song from a popular band, or a better-known song from an obscure band. A perfect example of this is my band REC’s version of the Beatles’ “I’ll Be Back”, from the new EP, Syncopy for the Weird. It’s not as well known a Beatles song, but I’ve always loved it. I also love the music from Hamilton, one one of the slow groove songs had a beat that I knew would bring out a smoky funkiness in “I’ll Be Back” that’s not prominent in the original.

There are dozens - if not hundreds or thousands - of covers that are as good as or better than the first versions. I talk about a bunch of them in the podcast. So, like, listen if you want all the goodies. And especially if you’re ready to disagree, because all of this is subjective.

I wanna know what you think. Do you know “Hazy Shade of Winter”? If so, which version do you like better? Are there covers that you prefer, such as maybe the Beatles’ “Twist and Shout”? Do you like their version of “I’ll Be Back” or mine? What about the CHALLENGE list below? Watch the podcast to see what I think – and let me know if you agree or not! Discuss dammit!

“Twist & Shout” – The Top Notes / The Isley Brothers / The Beatles

“All Along the Watchtower” – Bob Dylan / Jimi Hendrix

“Where Did Our Love Go?” – The Supremes / Soft Cell

“Always Something There to Remind Me” – Dionne Warwick / Naked Eyes

“The Greatest Love of All” – George Benson / Whitney Houston

“I Will Survive” – Gloria Gaynor / Cake

“The Man Who Sold the World” – David Bowie / Nirvana

“I Will Always Love You” – Dolly Parton / Whitney Houston

“Nothing Compares 2 U” – The Family (Prince) / Sinead O’Connor 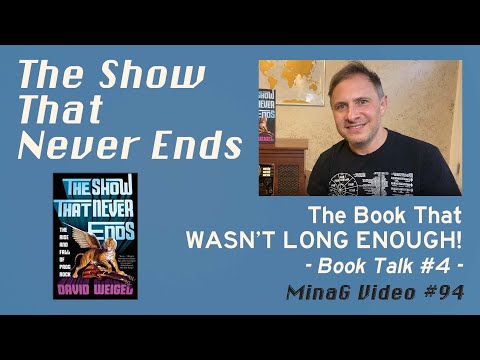 Book Talk #4 - David Weigel's The Show That Never Ends: The Rise and Fall of Prog Rock

Tribute to Terry Kath of Chicago

How do you feel about negative reviews?